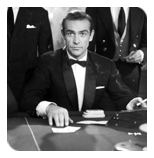 50 years after “Dr. No”, the first of the Bond movies, the movie franchise is a mainstay for film aficionados and and Bond fans in general. Designing 007: Fifty Years of Bond Style comes to the TIFF Bell Lightbox to showcase the distinct style of the suave secret agent, villains and sets. The exhibition which is organized by the Barbican Centre, London in partnership with EON Productions, coincides with the release of “Skyfall” (Bond’s 23rd addition to the Bond series).

Paying homage to the British, European and American craftspeople and designers the exhibit features Bond memorabilia like Oddjob’s hat, the Anthony Sinclair overcoat worn by Sean Connery, the white bikini worn by Ursula Andress and so much more. Spanning the years of the franchise the exhibit will allow you to follow along through the series’ fashion, technology, design and travel. Along with the movie trinkets clips from the movies will be screened throughout the exhibition, which in all reality are the stars of the show. The culmination of all British flair produced by movie magic and surrounding one man by the name of Bond, James Bond.