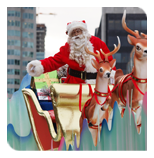 The Santa Claus Parade has been a Toronto tradition since 1905. Fantastic animated floats leave the corner of Christie and Bloor Street West in the company of two dozen marching bands and a couple of thousand costumed participants, cheered along by excited kids. There will also be a Holly Jolly Fun Run where participate will run a 5k.

Toronto's Santa Claus Parade is the longest running children's Parade in the world and is broadcast across North America and as far away as New Zealand, Norway and Ireland.