event filter
Home » Calendar of Events » The Wizard of Oz 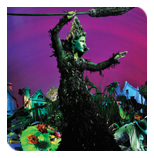 Tickets go on sale September 24th for the North American premiere of The Wizard of Oz which will grace the stage of the Ed Mirvish Theatre. Andrew Lloyd Webber's new stage adaptation of The Wizard of Oz a classic tale of enchantment. Based on the ever popular MGM screenplay, this new production brings to life the iconic songs from the Oscar® winning movie score. The stage will come to life with all the favorite characters and movie memories including a couple of new surprises along including new songs by Tim Rice and Andrew Lloyd Webber.

But the Toronto show is now quite complete, because the part of Dorothy has yet to be cast and will be chosen with the help of a television audience. Beginning September 16th on CBC TV's “Over The Rainbow,” the search for a new Canadian star to wear the ruby red slippers will be in the hands of Arlene Phillips, Thom Allison and Louise Pitre. The esteemed panel of judges will join Andrew Lloyd Webber on Canada's weekly journey to find a new Dorothy, along with host Daryn Jones.